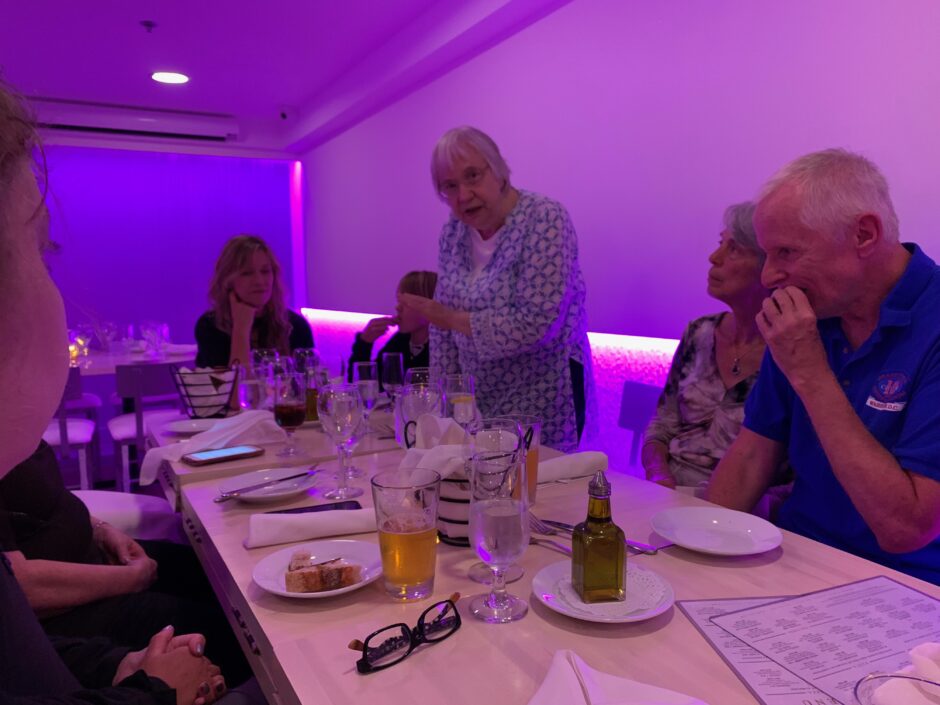 A Message from MFS Past President Phyllis Cole:

It’s a great pleasure to let Fuller Society members know that on July 9 we presented our triennial Award for Social Service to pioneering journalist and educator Christina Asquith.  The setting was our society dinner party at the American Literature Association meeting, with thirteen of us, including Christina and her ten-year-old daughter Marianna, gathered around a conversational table at Piattini in Boston’s Back Bay.

The Social Service Award recognizes ”extraordinary achievement in extending the social ideals advanced by Margaret Fuller,” and the award committee realized immediately that this year’s honoree had to be Christina Asquith.  You may remember that in 2018 Megan Marshall offered an interview with Christina in Conversations, which you could access here.  But now we have caught up with her more recent career as well.

Through the interview we heard about Christina’s amazing work in establishing the Fuller Project for International Reporting, designed to support the investigation of women’s issues around the world.  Christina had personally experienced the difficulty of getting such issues recognized by major press outlets as a freelance reporter in Baghdad and Istanbul in the years after 2003.  A decade later, reading Megan Marshall’s biography of Fuller as she organized this collaborative project was like ”gasoline poured on a simmering fire,” she said, and as a result the project honored Fuller in its official name.    Christina Asquith served as editor-in-chief of the Fuller Project from 2014 to 2020, during which time the organization raised $5 million for its work—with more in the pipeline—and grew incrementally in scale and visibility.  Some of their early stories concerned a Syrian girl who lost her violin and music career in the war, a tragically large number of Russian women murdered through domestic violence, and a Turkish woman with an MBA inheriting her father’s confectionary business.  But Christina also landed a cover story in Time magazine (9-2-2019) about women living less far away, in the “Left Behind Economy” of waitress work for minimum wages in this country.  By 2020 the Fuller Project had become an established part of the international press, and you can see its range of current publications here.

At this point, however, Christina was ready for a new initiative.  The burgeoning of the Fuller Project, she felt, owed a lot not just to its unfolding in times of #MeToo, Mideast war, and Hillary’s well-publicized campaign.  In addition, a new generation of women around the world was getting educated to use Twitter and the internet and do their own coding.  And so she took on direction of the new Hack Club, an educational initiative to accelerate such literacy, through an alliance of school-based clubs around the world with the most advanced women in tech spaces, from bitcoin to artificial intelligence and space technology.  “I wanted to be part of something radical,” she wrote to me about this in one email.  We live in an internet-driven world; collectively we create a new kind of journalism, with many people rising with skill to tell their own stories. And yes, she assured me, this social justice campaign was equally in the spirit of Margaret Fuller.  Our committee agreed right away!   “Learning to code,” declares the club’s website, “is uniquely like gaining a superpower—turning you from a consumer of technology into a creator.”

And so the Social Service award recognizes Christina Asquith as both a journalist and an educator.  At the dinner in Boston she was given a carved wooden plaque, as well as a modest donation to the Hack Club and lifetime membership in the Margaret Fuller Society.  To Marianna we gave a book sack with the motto “Let them be sea captains,” courtesy of the website for Peter Reilly’s Fuller documentary.  Christina warmly embraces her membership and hopes to stay in touch as we move forward toward an international conference on “Journaling for Justice.”

Three years ago the Social Service award was given to me (indeed given my name), recognizing work simply to further the society’s connection with the Margaret Fuller Neighborhood House in Cambridge.  As I hope you know, this was her birth home, not far from Central Square; but since the early twentieth century it has also been a service center for the working, often immigrant and economically struggling, people in its area. I’ve been happy to increase the contact between this place and Fuller’s legacy, including her own calls for justice to the poor. But this year, heading the search for the next recipient of the “Phyllis Cole Award for Social Service,” I have welcomed the opportunity to flip the picture and recognize communications about women around the world. Both are authentic Fuller. Writing to the Tribune from Rome in 1848, she described violence against women in the very midst of revolution as a subject she would take up again “if I live.” Instead, she had to rely on the efforts of others, among whom we’re happy to recognize Christina Asquith and her expanding network.

Please join me in welcoming Christina to the Margaret Fuller Society.