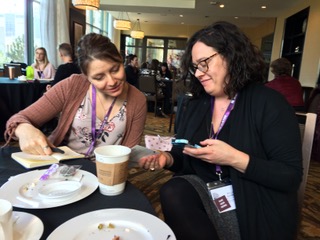 This post was written by Margaret Fuller Society President Charlene Avallone, who also provided the photos from the event.

Margaret Fuller was very much in evidence at the 2018 Triennial Conference of the Society for the Study of American Women Writers in Denver (November 7-11), and the participation of Society members there was gratifying. The richly rewarding gathering around the conference’s timely thematics of “Resistance and Recovery across the Americas,” afforded many highlights.

The stimulating session on Thursday spoke to the conferences themes, while it both answered to the Society’s initiative of promoting attention to Fuller in the company of other women writers and extended genealogical excavation to include a male (proto)feminist and nineteenth-century women artists. Moderator and Past-President Phyllis Cole’s introduction linked the panel to the varied and complex models of relation alternative to lineal genealogy that are discussed in the essay collection that she edited with Second Vice President Jana Argersinger: Toward a Female Genealogy of Transcendentalism (University of Georgia Press, 2014). Fritz Fleischmann, speaking on “Margaret Fuller and John Neal,” expanded recovery of the nineteenth-century dialogue between women and men as they attempted to work their way out of patriarchal structures of thought toward expanded ideas of “woman” and women’s rights. Etta Madden, in “Genealogies of Translation: Fuller, de Staël and Caroline Crane Marsh, “explored direct influences among these three women as they found travel and translation means of crossing boundaries of nation, language, and culture to arrive at new knowledge and self-transformation. Yoshiko Ito’s paper, “Looking for Transpacific Genealogy in Early Feminism: A Study on the Analogy between Margaret Fuller and Ume Tsuda,” reflected on a serendipitous newspaper juxtaposition to present a critical model of how inspiration can travel across cultures even without direct influence. Janessa Kenway opened a largely uncharted topic in Fuller Studies with “The Visual Genealogy of Margaret Fuller” as she began to map Fuller’s Transcendentalist aesthetic beyond her own appreciation of contemporary artists to recover nineteenth-century female painters and sculptors of the ideal. Read the paper abstracts here.

Fuller received attention at other panels, too. In the session “Resisting The Canonical Syllabus,” Lesli Vollrath’s talk, “Voices of Resistance Unfolding: Teaching Margaret Fuller as a Nasty Woman in Woman in the Nineteenth Century,” advanced the Society’s other current initiative, to promote the teaching of Fuller. And Sarah Salter presented “Margaret Fuller’s Italian Regionalism” at the session “Regionalism Beyond Fiction:  Women’s Resistance Across Periodical Forms.”

The Society hosted two well-attended social events on Friday. The afternoon tea, a collaborative event with the Sedgwick and Stowe societies, was organized by Jana Argersinger, Noelle Baker, Cindy Damon-Bach, and Beth Lueck (Past President, Harriet Beecher Stowe Society), with the adept direction of Jordan Von Cannon (VP of Publications for SSAWW). In addition to tasty pastries, the tea provided an occasion for new MFS members to introduce themselves and their work in a conversational setting and for all members to engage with scholars studying other American women writers. A hearty welcome to new members who joined the Society around the Conference: Kate Culkin, Elizabeth Dean, Jenessa Kenway, Etta Madden, and Lisa West. Noelle also arranged the dinner that spirited Society members away from the tourist district to experience something of a Denver neighborhood, as well as a delectable meal, at the Mexican restaurant El Jefe. Dinner offered further opportunity for that favorite discourse of Fullerites–conversation.

The following day, a standing ovation from a packed ballroom at the conference Awards Luncheon welcomed Phyllis Cole to the podium to accept the Karen Dandurand Lifetime Achievement Award. The award, given every three years, recognizes committed and extended work that has furthered the goals of SSAWW “to support and broaden knowledge among academics as well as the general public about American women writers.” The award speech, delivered by Jana Argersinger, acknowledged the many dimensions of Phyllis’s outstanding career: her extraordinary teaching, public speaking, publishing, groundbreaking research on women writers, service, mentoring, and community-building. (Read the nomination letter here.) No applause was more heartfelt than as Phyllis was honored for “her passion for shaping, encouraging, and inspiring the next generation of readers, thinkers, and scholars that makes Dr. Cole such as strong role model for us all.”

In her acceptance speech, Phyllis invoked Fuller, too, as a model, a “model of resistance” for today in calling the women of her country to bring their “moral power” to protest the martial nationalism that was transpiring at the Mexican border in 1844.  One conference participant, following up on the conversation at a panel sponsored by the Lydia Maria Child Society, shared a practical model of such protest for teachers to post on a syllabus: “As an educator, I fully support the rights of undocumented students to an education and to live free from the fear of deportation. I pledge confidentiality to any student who wishes to disclose their immigration status, and I will work with students who require immigration-related accommodations.” The syllabus also included a web address for contacting the state’s New Mexico Dream Team.

Many left Denver remarking on the inspiration, energy, and inclusion that characterize the SSAWW Triennial and already looking forward to the next conference in Philadelphia in 2021.