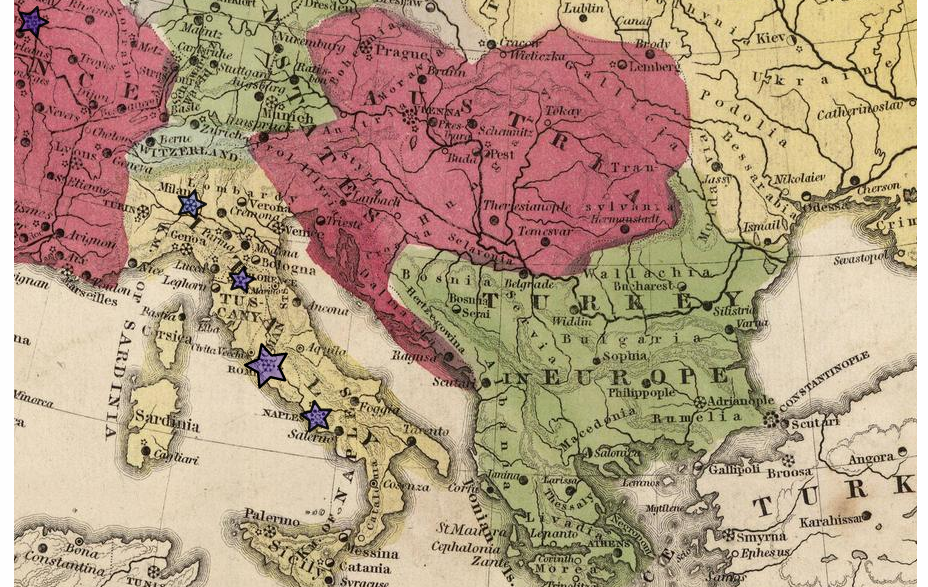 The Margaret Fuller Transnational Archive is a digital humanities project housed in Northeastern University’s NULab for Texts, Maps, and Networks (NULabTMN). The aim of the project is to digitally map networks of publication involving Margaret Fuller and the circles of European and American political and cultural figures, including Horace Greeley, and Giuseppe Mazzini and Cristina Trivulzio di Belgiojoso with whom she came into contact during the years 1846-1850, when she lived in Europe.

Between 1846 and 1850, Margaret Fuller was a foreign correspondent for Horace Greeley’s New-York Tribune, based at different times in Italy, France and England. The archive collects all of Fuller’s Tribune correspondence written between August 1846 and January 1850, as well as the Tribune Correspondence of Christina di Belgiojoso from 1850 and 1851. Browse the archive here.

Using Neatline exhibits, the creators have been able to spatially and temporally visualize both Margaret Fuller’s and Cristina Belgiojoso’s travels and writing. The textual and geographic maps demonstrate broader trajectories of writing to highlighting specific texts in conjunction with contemporary social and political events. View the travel and writing maps here.

Many thanks to Sonia Di Loreto, William Bond, and Sarah Payne for presenting this work at the ALA 2017 Conference.