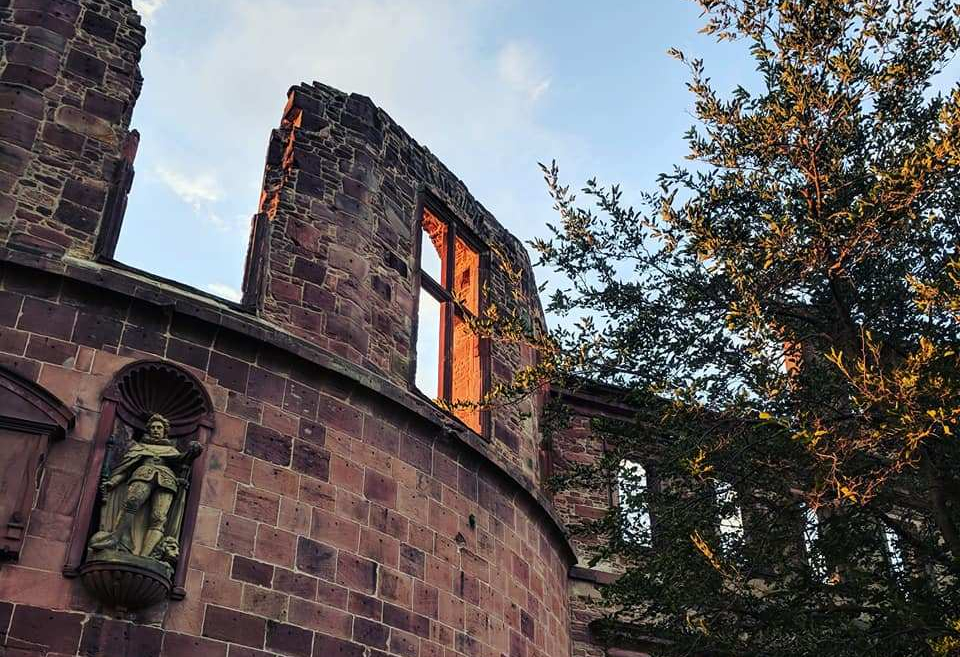 Dan Malachuk, President of the Emerson Society, writes: “In late July, more than seventy scholars from around the world gathered at the University of Heidelberg for four balmy days of intense cross-disciplinary dialogue about some of the most pressing issues in Transcendentalist studies.  Perhaps the largest conference ever held on this subject, “Transcendentalist Intersections: Literature, Philosophy, Religion” was the vibrant conclusion to a four-year collaboration of the University’s Anglistisches Seminar and Center for American Studies, the Margaret Fuller Society, and the Emerson Society.  Reflecting at a closing session, participants recalled especially fruitful conversations about the continued indispensability of archival research, recovering “minor” figures, assessing intra-movement conflicts as well as confluences, whether to de- or re-transcendentalize the movement, interrogating as always its nationalist character, and remembering the periodicals, including the Dial, whose subtitle was also the conference’s and—let us hope—a continuing prompt for more such intersections.”

Laura Dassow Walls, in her keynote address, called to mind Fuller telling Thoreau that nature is no more his until he is more hers. This sentiment of embrace, exchange, and openness characterized many of the papers, dialogues, and exchanges throughout the conference. Walls crafted a beautiful and inspiring argument for what she calls the “parahuman” (as opposed to “nonhuman” or “posthuman”), reminding us that there really is no “not-me,” that we are all connected, and that we are the very criminals we are searching for in our present climate crisis. Responding to a question about how to reconcile ourselves with Emerson’s use of the word “Nature” given recent ecocritical scholarship that has problematized that term (I am thinking of Timothy Morton especially), Walls pointed to the specificity of each instance, moment, and context of Emerson’s use of the word “nature” and called for us all to remember to be very specific when we use it ourselves.

On the next day, Fullerites and Emersonians gathered for panels on Alcott, Fuller, Emerson, and Thoreau. Russell Sbriglia’s paper on Fuller, Hegel, and concrete universality discussed Fuller’s work to harmonize the particular with the universal. Sbriglia used the “+” in LGBTQ+ to demonstrate the relevancy of Fuller’s argument that there is no humanity unless we are all a part of it; we are not free until all of us are free. Sbriglia suggested that Fuller’s assertion that Man cannot be realized without Woman is not an addition but a transformative process that affects the whole. You can read a full abstract of Sbriglia’s talk here.

There were so many beautiful papers to feed the mind at the conference. To touch on some of those about Margaret Fuller, I will do my best to quickly introduce them. For more details, you can read the full abstracts in the embedded links below. 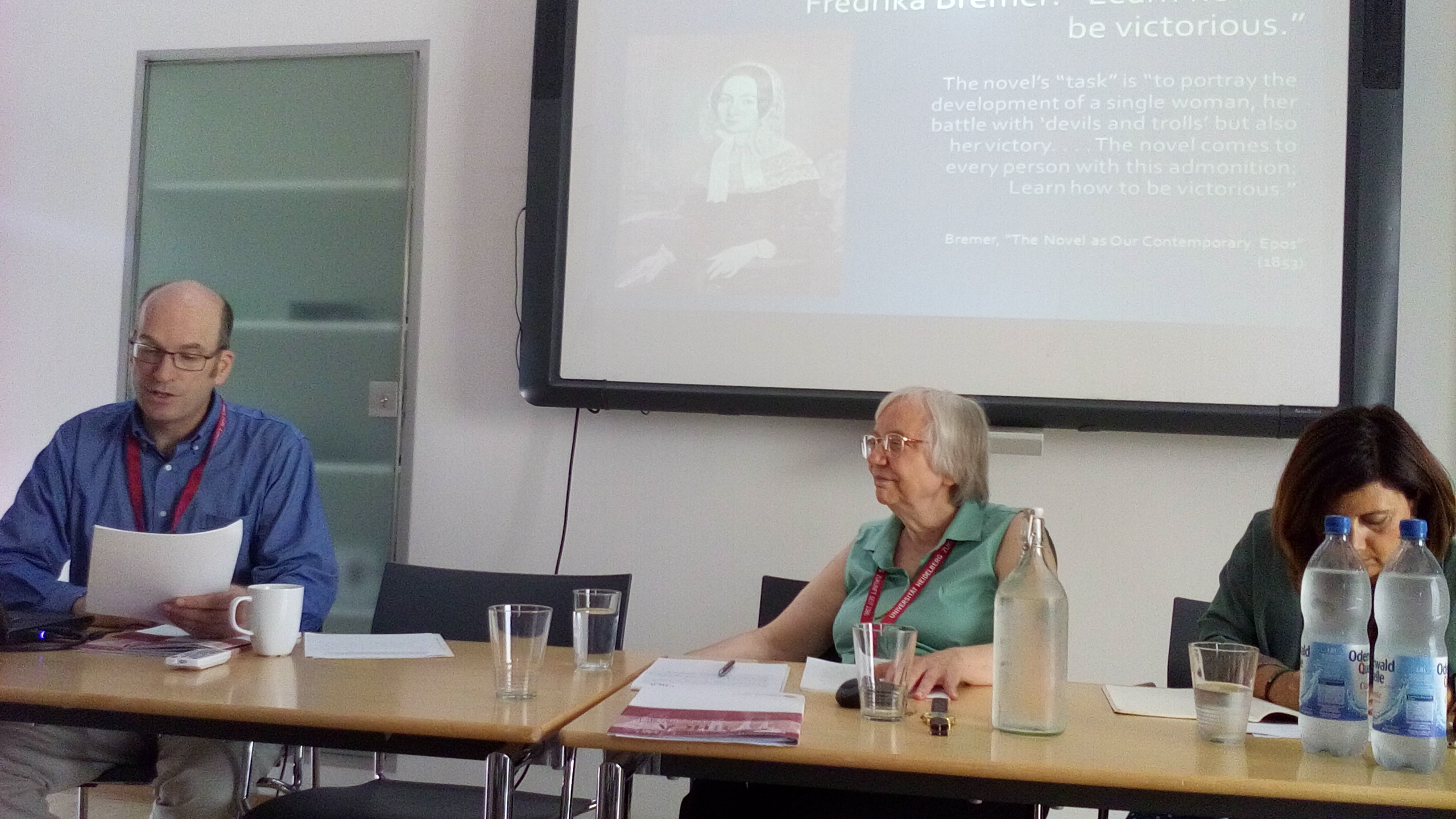 There was a diverse range of subjects covered. One vibrant thread of discussion could be traced between Phyllis Cole‘s paper on Fuller and Socialism in Paris and David Robinson‘s paper on Fuller, Channing, and Fourierism. Mollie Barnes called our attention to the importance of sculpture as it captures historical movement and inspiration into action. Leslie Eckel presented her work on utopias focusing on failure. Christina Katopodis presented her sound studies work on “Pulse and Polarity” in Fuller and Emerson. Marina P. Kizima focused on the religious aspects of Fuller’s work and Denise Kohn focused on Fuller and women’s suffrage. In addition to covering Fuller’s Woman in the Nineteenth Century, there were papers on Summer on the Lakes such as Monika Elbert‘s and on Fuller’s letters such as Mario Bannoni‘s presentation on three letters of Fuller’s recently found in Italy.

Some papers focused on translation, such as Fuller’s translation of Conversations with Goethe, and Adrienne Perry asked us to think about the ethics of Transcendental translation. Other papers focused on periodicals, such as Brigitte Bailey‘s paper on The Dial and print culture; Sonia Di Loreto presented a paper on Fuller’s “A Daughter of Italy” (1848) and transnational intersections in the People’s Journal. In her paper on Emerson and George Sand, MFS President Charlene Avallone urged us all to read more of George Sand’s work. Sarah Wider read a beautiful paper on Caroline Sturgis, who drew for Ellen Tucker Emerson when she was a little girl. David Greenham presented a paper on Emerson’s cognitive topology, looking at his metaphors not as literary devices but as working out ways of thinking. His diagram of light refraction on the eye was very impressive. There really was too much wonderful work than could be captured in a single event recap and do it justice.

At the conference, the Margaret Fuller Society was able to conduct a meeting to discuss current business and spend time getting to know new members and share scholarship. 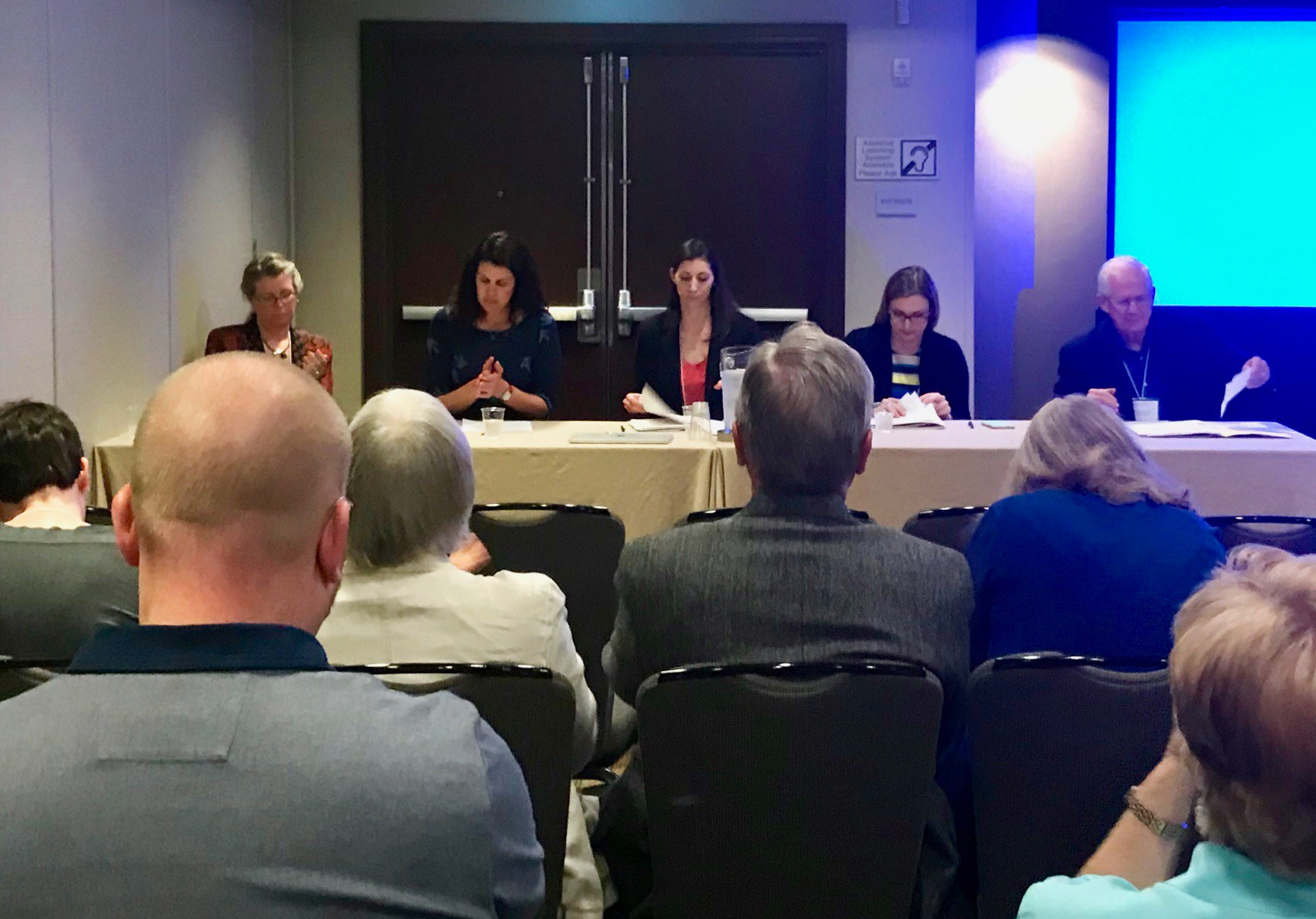 From May 24-27, 2018, members of the Fuller Society gathered in San Francisco at the Hyatt Regency Embarcadero for the 27th Annual conference of the American Literature Association. Over the course of the four days, the Society held two panels, a successful business meeting, and one dinner with a lovely view of the Bay.

On Friday afternoon’s panel, “Margaret Fuller: In the Classroom and Beyond,” which was chaired by Larry Reynolds (Texas A&M University), the first presenter was Holly Dykstra (Laredo Community College). In her paper “Using Fuller to Teach Fuller: Creating Agency and Security,” Dykstra outlined the ways in which Fuller serves as something of a role model for her students (some of them first generation or undocumented) at her college near the border of Mexico. Dykstra examines the concepts behind Fuller’s Conversations—“immersing others in challenging academic situations, encouraging shared knowledge, and spreading education to those who lack agency”—as a way for her students to not only relate to Fuller, but potentially see Fuller’s will and work as models for their own. Callie Gallo (Fordham University) presented “Teaching Margaret Fuller, Fanny Fern, and the Nineteenth-Century Press in the Wake of #MeToo,” drawing startling connections between nineteenth-century scenes of male aggression and sexual violence and news stories unfolding in our contemporary climate. Lesli Vollrath (University of Houston) presented “Elemental Bodies: Mapping the Materialist Cartographies of Margaret Fuller’s ‘Leila’ and Kate Chopin’s The Awakening in a Women’s, Gender and Sexuality Studies Classroom,” providing an overview for teaching Fuller’s and Chopin’s texts through critical frameworks ranging from Hélène Cixous’s “The Laugh of the Medusa” (1976) to Stacy Alaimo’s New Materialist concept “trans-corporeality.” These frameworks, Vollrath suggests, create relational possibilities for the female body in its environment. Nanette Rasband Hilton (University of Nevada, Las Vegas) also gave a paper concerned with Fuller’s “Leila,” “Praxis of Duality: The Sisterhood of Fuller’s ‘Leila’ and DuBois’s ‘Atlanta.’” Hilton’s paper demonstrated the potential of a reader’s own ipseity to promote “multiple social identities with awareness of crosscutting memberships.” At this notably well-attended panel, Hilton led a moment of silence to honor the memory of prodigious Fuller scholar Professor Jeffrey Steele.

On Saturday’s panel, “Margaret Fuller: Out of New England,” chaired by Society Treasurer Noelle Baker (Independent scholar), Simone Puelo (University of Connecticut, Storrs) presented “Of Good and Noble Aspect: Margaret Fuller, Catholicism and Pius IX (1847-1850),” tracing Fuller’s ambivalent views of Catholicism and Pius IX, as well as her criticism of theocratic monarchy and the Papal State. Puelo sees many of Fuller’s critiques of the Church as “emancipatory” in nature, exposing the institutional injustices common Catholics faced. Clemens Spahr (Mainz University, Germany) presented “Romantic Revolutions: Cosmopolitan Radicalism in Margaret Fuller’s Dispatches from Europe,” which reads Fuller’s European dispatches for Horace Greeley’s the New-York Tribune as “not a refutation of her earlier Transcendentalism,” nor a “simple continuation” of that project, but, rather, a “rewriting” of her Romanticism. Katie Kornacki (Caldwell University) gave a paper entitled “‘The Morning Star of Margaret Fuller’: The Woman’s Club Movement and the Legacy of Fuller’s Conversations,” outlining Fuller’s continuing influence in women’s clubs across the United States. Michael Schrimper (Independent scholar) presented a transatlantic study, “Who’s Afraid of Margaret Fuller?: Literary and Biographical Connections Between Virginia Woolf and Margaret Fuller,” delineating the ways in which Fuller, in “The Magnolia of Lake Pontchartrain” in particular, anticipates the high Modernist feminist narratology of Virginia Woolf’s experimental 1917 sketch, “Kew Gardens.”

Prior to Saturday’s panel and business meeting, Fullerites gathered for a Friday evening dinner at Sens, a warmly-lit Mediterranean restaurant overlooking the Bay Bridge. Before partaking in a meal including grilled Spanish octopus and dry-aged rack of lamb, Society members watched as Treasurer Noelle Baker presented the first inaugural Phyllis Blum Cole Award for Social Service to its eponymous original recipient. In giving reasons for her receiving the award, Baker cited Cole’s: forging a relationship between the Society and the Margaret Fuller House of Cambridge, Massachusetts, a non-profit organization propagating Fuller’s social ideals; and her vital role as President of the Society, which, in her three-year tenure, saw Cole expanding membership, increasing funds, generating a Society newsletter, renewing panel status at MLA, establishing a new Society website, and revising Society governance structure, among other feats. Society members watched with admiration as Baker presented Cole with a plaque engraved with Fuller’s words from her 1844 New-York Tribune piece, “Thanksgiving:” “No home can be healthful in which are not cherished seeds of good for the world at large.” A similar plaque will be presented, to quote the speech written by Baker and current Society President Charlene Avallone, “every three years to a Society Member” whom the Executive Council “recognizes as having worked in some significant way to promulgate the social ideals advanced by Margaret Fuller.” In addition to the plaque, the award it is to take the form of a donation to the Margaret Fuller Neighborhood House.

To top off the occasion in honor of Professor Phyllis Cole, there were cheers of congratulations, along with heartfelt wine toasts, all around.