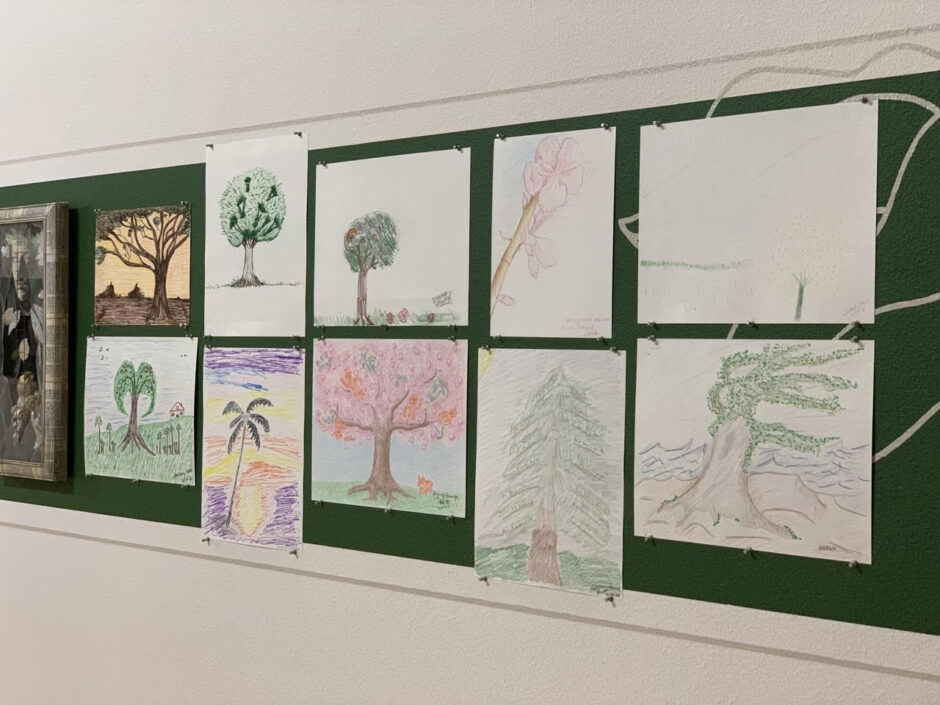 This post was written by Contributing Author Jenessa Kenway, a doctoral student at University of Nevada Las Vegas. Her dissertation work explores links between pastoral and botanical imagery and the expression of feminine consciousness.

I was deeply inspired by a 2018 conference organized by the Society for the Study of American Women Writers (SSAWW). The conference showcased a dazzling array of feminine scholarship and women authors of every rank and file and it was my first time presenting a paper at a conference. SSAWW scholars introduced me to a new realm of the academic world and the interconnected nature of that world. I left with a hurricane of ideas, and two lasting things: friends in the Margaret Fuller Society and the idea for an art exhibit.

I was already interested in Fuller and the visual arts. The essay I presented, “The Visual Genealogy of Margaret Fuller,” explored Fuller’s feminine aesthetics and potential interest in women artists. I owe many thanks to the supportive Fullerites on the panel and in the audience whose friendly presence and support helped calm my nerves.

After my panel, I attended loads of others, one of which­–a roundtable on Louisa May Alcott and the humanities­–stood out from the rest. The presenters all covered innovative strategies for teaching Alcott that were applicable to literature in general. Last to present was Mark Gallagher, who overviewed the exhibition he put together for the UCLA Library for the 150th anniversary of Little Women. His exhibit displayed artifacts from Alcott’s life and showed Alcott’s continuing influence by featuring the work of women writers and leaders who were inspired by the rebellious protagonists of Little Women.

An art exhibit about literature: I was hooked. At the Friday night mixer, Gallagher generously shared with me more about his exhibit, and I began to plan my own.

My background is in visual art. In a former life, I pursued a career as a visual artist, that is until I discovered that I loved writing about art. I’ve come to realize that writing is as much an art form as the plastic arts. While they have their distinctive qualities, text and image share much in common and complement one another.

A literary art exhibit seemed to be the perfect way to merge my past with my present, the world of art with the world of literature. Soon Fuller’s visionary essay, “The Magnolia of Lake Pontchartrain,” became the narrative inspiration for my own exhibit: A Beauteous Tree: Margaret Fuller’s “Femality,” which was open at the Marjorie Barrick Art Museum from May 28 to July 24, 2021. You can take an informal tour of the exhibit here (opens in new window).

I envisioned a hybrid exhibit: text and images nested within a space that is itself a work of art. In the exhibit, a thick green band, like a green scroll or long segments of chalkboard, circumnavigates the entire display space, elevating quotations to the level of paintings. Strategically placed magnolia leaf accents create viewing areas further uniting text and image pairings.

The Magnolia tree of Fuller’s story explores the roots of feminine creativity through one of the oldest flowering trees on the planet. The use of a tree offers a means of expressing feminine identity while avoiding the gender indicators of the human body. The idea that feminine expression could occur without a female body, opens the story—and Fuller’s concept of “femality”–to a host of modern gender readings, of which she had never even dreamt, but nevertheless, renews the relevance of her work in our scholarly climate of diversity. This led me to organize the show around the magnolia story and Fuller’s concept of “femality.”

Like Gallagher’s exhibit, I was committed to showing how the literature of the past carries forward, impacting our lives today. I focused on tracking the appearance of Fuller’s concept of “femality” in other feminist texts and then paired these literary manifestations with works of visual art that enhanced the concept, providing a focal point for theory and story.

Thinking about how literature impacts us now makes me think about the different audiences of literature, from casual readers to university students to academic scholars. The format of an art exhibit was a good way to reach those different audiences and bring together different types of readers and find common interests. I think as scholars we don’t want to just be writing and making things for each other. It is important that the work of academia is accessible and has relevance and value to people outside of institutions.

In the wonderful zoom talk that she gave in conjunction with the exhibit, Dr. Christina Katopodis highlighted the benefits of biodiversity and the social and environmental dangers of allowing monocultures to dominate. People, plants, and insects thrive upon biodiversity that encourages, as Katopodis said, “diverse and vibrant” beings. At the 2018 SSAWW conference, within the Margaret Fuller Society, and in the organization of this exhibit, I experienced this vibrant diversity.

Activities during the zoom lecture demonstrated the diversity Katopodis talked about. She gave us three minutes and we each drew a magnolia flower that resulted in a host of floral interpretations that said as much about the one drawing as the flower they were thinking about. Later, we read passages from Fuller’s letters which included brief descriptions of plants such as amaranths, violets, and rose bushes. With each quote, we attempted to express the feelings and visuals of the plant imagery through the positioning of our hands and arms. In each exercise, we creatively expressed our observations. Watch the full lecture here (opens in new window).

For the exhibit, I held a drawing workshop on a Saturday afternoon, in which I talked about Fuller’s magnolia story, my own self-identification with the willow tree, and asked people to think about what they would look like as a tree. After a little hesitation, everyone began drawing. There was a tree with a fluffy bursting top; a long sinuous limbed tree of the savannah; a tree with ceremonial terracotta figures growing upon it, trees with hearts, lines of small trees representing children in front of big parental trees; trees blown by gusting winds.  Each tree was different, and everyone was able to find their own tree self.

The SSAWW conference is, of course, unrivaled feminine diversity. And the smaller circles of SSAWW also demonstrate diversity and interconnection. At a special luncheon, there were tables occupied with an assortment of nineteenth-century literature societies including Catharine Maria Sedgwick, Louisa May Alcott, Margaret Fuller, and Harriet Beecher Stowe, many of whom also have ties with the Emerson and Thoreau societies. While I’m not a member of all of these groups, I am connected through the cross-sharing of CFPs and the general spirit of cooperation. Talking to one another and allowing members to mingle, encourages rich conversation and an interconnected scholarly community.

My initial hazy goal of putting together an art exhibit inspired by Fuller taught me about myself and the kind of scholar I want to be and the positive effect of sharing ideas. The ideas and people I met through today’s vibrant network of scholarship grew into a beautiful art exhibit.

Jenessa Kenway is a Ph.D. candidate in literature at the University of Nevada Las Vegas studying feminine aesthetics and interconnections between art and literature from the 19th century to present. Her essay “Talking with a Magnolia Tree: Margaret Fuller and American Transcendentalism” was published in the 2019 Norton UNLV world literature essay collection, Sing Goddess. Her work tracking beauty and the sublime in Elizabeth Stoddard’s Two Men won the 2020 Brooks-Hudgins award and she was awarded the Dorothy Mae Freischel scholarship for excellence in interdisciplinary scholarship, projects, and classroom instruction methods. Her essay on visual and literary superrealism in the work of Karl Ove Knausgaard was published in 2019 in Penn State’s interdisciplinary journal Soundings. She writes on art and culture for KNPR’s Desert Companion and teaches courses in composition and world literature.Support for the exhibition came from the UNLV Jean Nidetch CARE Center, a Nevada Humanities Project Grant, The National Endowment for the Humanities, and the WESTAF Regional Arts Resilience Fund, a relief grant developed in partnership with The Andrew W. Mellon Foundation to support arts organizations in the 13-state western region during the COVID-19 pandemic.