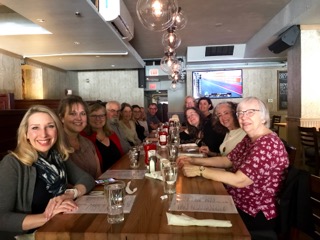 On Friday, Mollie Barnes of University of South Carolina Beaufort gave an engaging paper on the panel “Anonymity, Access, Absence: Challenges of Recovering Nineteenth-Century Literature,” titled “Transatlantic Recovery: How Margaret Fuller’s Lost History Teaches Us to Read,” which moved away from Fuller’s own texts to examine the development of Fuller’s mythos and legacy through periodical reports of her death.

The Saturday, May 25th session of the ALA conference featured well-attended back-to-back panels sponsored by the MFS. First Vice President Sonia Di Loreto chaired the first panel sponsored by the MFS, “Margaret Fuller’s Languages.” The papers focused primarily on Fuller’s prolific translation work and the ways these translations fit into her overarching intellectual projects. Board Member Fritz Fleishman presented on “Translating Fuller: The Play of Interpretation.” Brigitte Bailey of University of New Hampshire gave her paper, “Translating Urban Radicalism for the New-York Tribune: Fuller’s Readings of the Deutsche Schnell post,” which connected directly with the attention to Fuller’s interest in German language and philosophy as covered in the paper given by Christina Zwarg (Haverford College), “Glimpsing Goethe’s Corpse: Translating the Now in Fuller’s Eckermann. Chaired by Katie Kornacki, editor of “Conversations,” the panel he second panel also approached Fuller from a formal/generic angle, focusing particularly on her poetry, and was titled “Winged Sphinxes: Margaret Fuller’s Poetry and Poetics.”  The papers were “Fuller and the Flowering a Female God: Male Sacrifice and Female Transfiguration in ‘Raphael’s Deposition from the Cross’’” from Ariel Silver of Claremont Graduate University, “Portals of Transformation: Object Studies in Fuller’s 1844 Poems” by Joan Wry of Saint Michael’s College, “The Vanishing Indian in Margaret Fuller’s ‘Governor Everett Receiving the Indian Chiefs, 1837’” by Thomas Sorensen of University of Western Ontario, and “Fuller’s Hauntological Poetics” by Katie Simon of Georgia College. This panel was followed by a particularly lively conversation regarding the potential intersections of thing theory and Margaret Fuller’s poetry, particularly growing out of Silver’s and Wry’s papers. Read the full abstracts and panel CFPs here.

These two excellent panels were followed by the Margaret Fuller Society’s businesses meeting, for which full notes are available here.

On Sunday morning a dozen Fullerites–Society members and guests–ended the conference by sharing brunch at Brownstone’s, billed as “a star on Boston’s vibrant culinary scene.”  Thanks to the planning of VP1 Jana Argersinger, we enjoyed good conversation over eggs Benedict and granola. Talk of Fuller ranged over the past and future, as guests included Peter Wiley, whose ancestor John Wiley published (and censored) the author, and members discussed plans and dreams for the next international conference the Society will sponsor, to be co-ordinated by Mollie Barnes.

Many society members participated in panels and roundtables at the conference, including: